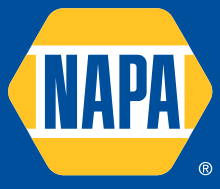 The National Automotive Parts Association (NAPA) was founded in 1925 to meet the United States‘ growing need for an auto parts distribution system. It is a retailers’ cooperative that distributes parts to both corporately and independently owned auto parts stores.

NAPA’s parent company is Genuine Parts Company (NYSE: GPC) (founded 1928), which operates 58 of NAPA’s 69 distribution centers.[1] NAPA’s only other member, since the acquisition of NAPA Hawaii by Genuine Parts, is Quaker City Motor Parts of Pennsylvania.[2] The management of Genuine Parts and NAPA are highly integrated.

NAPA is a supplier of replacement parts, specialty parts and equipment for the automotive repair, collision, heavy-duty truck, and industrial markets. NAPA serves automotive consumers through the UAP (United Auto Parts) division of Genuine Parts and NAPA Autopro repair facilities in Canada, Mexico and other locations throughout the Caribbean and Latin America.

NAPA is an official sponsor of NASCAR. The company sponsors the #56 Toyota Camry driven in the NASCAR Sprint Cup Series by Martin Truex, Jr. for Michael Waltrip Racing, and also sponsored Michael Waltrip from 2001 until 2009 when he drove for Dale Earnhardt, Inc., Bill Davis Racing, and his own team. All four of Waltrip’s wins were with NAPA as his sponsor, including the 2001 and 2003 Daytona 500s. NAPA also sponsors Truex’s brother Ryan in the NASCAR K&N Pro Series East and was the sponsor for multi-time champion driver Kelly Moore in the same series.

This article uses material from the Wikipedia article National Automotive Parts Association, which is released under the Creative Commons Attribution-Share-Alike License 3.0.